In the construction sector, aggregates refer to a granular mixture which can be combined with water and cement to produce concrete. Depending on the requirements of the cement as the end product, aggregates must possess certain characteristics to yield the desired physical and static properties of the concrete which is of great importance to the structural stability of a given building project. Particular attention when analyzing aggregates for their suitability for concrete is paid to two vital parameters: grain gross density and particle size distribution. For the production and testing of aggregates for concrete the following technical standards apply:

The determination of grain size distribution or classification of grain groups in accordance with DIN 1045 and other national standards is to be completed through a standard sieving analysis, whereas the methods and instruments for the screening analysis are described in EN 933-1/2 which outlines the sample preparation and sieving process and sets the aperture sizes to be used for gradation testing.

The sieves that are to be used for screening of aggregates for concrete are typically referred to as primary and expansion sets of sieves with the primary set including all sieve sizes specified in EN 933-2:1996 (with the exception of 63µm) and the two expansion sets encompassing aperture sizes located between those of the primary set to increase measurement resolution when required. According to German guidelines, conventional analysis for concrete is performed with the sieves of the primary set plus Expansion Set #1; Expansion Set #2 is only used for detailed classification of grain size distribution and determination of flakiness index. 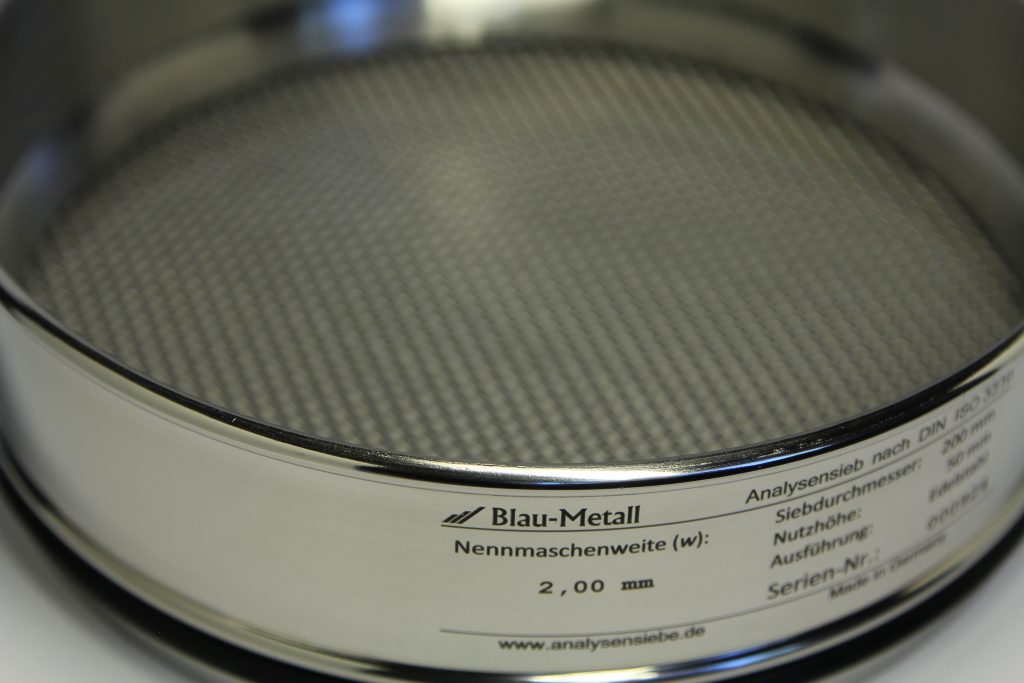 Classification of physical properties of aggregates via screening analysis aim to determine two absolute parameters: grading index (k) and cumulative sieve throughput (D-Sum) [Cumulative sum of sieve throughput in Vol-%.] which have been deemed mandatory specifications for aggregates used in the construction sector. The use of test sieves that conform with ISO 3310-1 (for woven wire cloth sieves) and ISO 3310-2 (for perforated plate sieves with square apertures) has also been declared obligatory by the aforementioned technical standards governing the use of aggregates for concrete production.

Aggregates are also classified with respect to the fraction of fines contained within them since fines can have a significant effect on the structural properties of the finished product. As such, the fines fraction of aggregates must also be declared by the producer when delivering the material for use in concrete production. According to technical standards, fines are defined as the mass percentage passing through a 63 µm woven wire cloth sieve conforming with ISO 3310-1 upon which the aggregate can be classified according to the different F-Categories.

Filler aggregates (consisting of inactive anorganic compounds) made from quartz powder or limestone powder are also to be analyzed with respect to grain size distribution. As defined in EN 933-10 (Tests for geometrical properties of aggregates - Part 10: Assessment of fines - Grading of filler aggregates (air jet sieving), particle sizes in filler are to be determined using at least three test sieves (2,0 mm, 125 µm, 63 µm) conforming with ISO 3310-1.

Blau-Metall laboratory test sieves in accordance with ISO 3310-1/2 fulfil all requirements of EN 933-2 and detailed optical inspection guarantees a high degree of statistical certainty for gradation analysis in the construction industry.

Primary Sieves for Gradation Analysis of Aggregates for Concrete

Test Sieves for Analysis of Filler according to EN 933-10